With a background in acting and singing, Marian is committed to writing well-rounded characters with believable dialogue and singable lyrics. She often depicts women of intelligence, creativity, and strength.

While at NU, Marian was a member of Theatre Building Chicago’s Musical Theatre Writers Workshop. TBC commissioned her to write the book for the full-length musical, Past Time, with lyrics by Jon Steinhagen and music by Grammy nominated composer, Ilya Levinson.

While earning her M.F.A. in Acting from California Institute of the Arts, Marian continued to write. Her musicals, Inconceivable, co-written with James Wilke, and McBeth! The Musical, co-written with Armando Acevedo, premiered at the Cal Arts New Works Festival.

After several years as a nomadic actor, Marian settled in Los Angeles to focus on writing. As a bookwriter, she developed three musicals at New Musicals Inc. for producers. She wrote Miss Vulcan 1939: The Belle of Birmingham, with lyrics by Noelle Donfeld and music by Jan Powell, for Red Mountain Theatre in Birmingham, AL. In addition to three productions at Red Mountain, the musical was produced at Actors Co-op in Hollywood and White Sage Theatre Company in NV. Marian wrote two shows at NMI for UC Irvine: Powder Puff Pilots, with lyrics by Noelle Donfeld and music by Emmy nominee Cindy O’Connor (www.powderpuffpilotsmusical.com), and Madwomen, with lyrics by Patricia Zehentmayr and music by Patrick Burns (www.madwomenmusical.com).

The Great American Melodrama and Vaudeville (Oceano, CA) has commissioned and produced five of Marian’s shows. She co-wrote the comedy, Silence of the Hams, with Tony award winner Scott Waara. She co-wrote the operettas Hansel and Gretel (or You Are What I Eat), Jack and the Beanstalk, and Little Red Riding Hood with Jordan Richardson, and Rapunzel (or Hair Today, Gone Tomorrow) with Eric Hoit.  Rapunzel  has also been produced by City Lights Theater Company of San Jose.

Her church, La Cañada Presbyterian, has premiered many of her works: her play, At Home in Galilee; her musical, Esther, with lyrics by Mary Garrison and music by Ann Moore Miller (www.esthermusical.com); her children’s musicals, Kids of Galilee (https://www.kidsofgalilee.com) and Sleepless in La Canada, with songs by Janet Boggs and Judy Brock; her adaptation of Henry van Dyck’s novella, The Other Wise Man, and her song cycle, Mother’s Word, with music by Christina Whitten Thomas.

In addition to the song cycle, Marian has collaborated with Christina Whitten Thomas on four choral commissions: “Resilient Voices” for VOX Femina Los Angeles (awarded a grant from the National Endowment for the Arts), “The Deceiver” for Seraphim Singers in Boston, “And I Shall Sing” for Middlebury College Choir in Vermont (awarded first prize in NDSU’s Edwin Fissinger Choral Competition), and “Spinning Through the Sky” for Bivins Honor Choir in Texas. The latter three pieces are available to purchase through Music Spoke (www.musicspoke.com).

She is a member of New Musicals Inc. and the Dramatists Guild. She has honed her craft at Writer’s Bootcamp in Santa Monica and participated in the Sundance Playwrights Lab twice.

As a performer, Marian has appeared in over forty plays and musicals.

In addition to her artistic work, Marian serves as Assistant Director of Spiritual Formation at La Cañada Presbyterian.

She lives in La Cañada with her husband, David Lamb, and their two children. 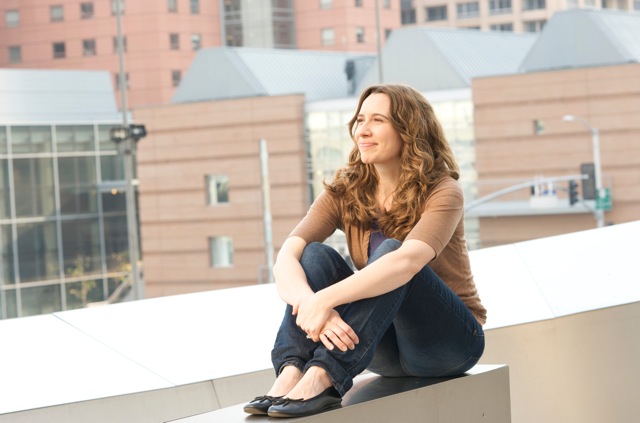